UNPREDICTABILITY AS A BLESSING

Synergy and courage in the production of emergency medical supplies 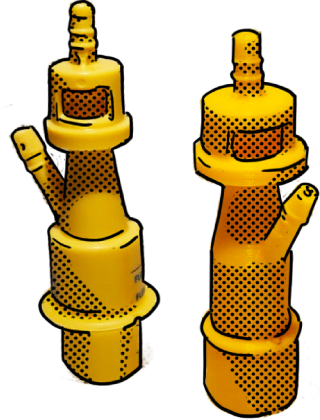 I like the word "unpredictable" because to me it evokes a host of other favourite words: creativity, epic, imagination, innovation.
Faced with the unpredictable, we Homo sapiens like to roll up our sleeves and get to work, building new tools, using our creativity and imagination, and becoming a better species as a result. This is what Albert Einstein wrote on this topic in 1931:

“Crisis is the greatest blessing for people and nations, because crisis brings progress. Creativity comes from anxiety as the day comes from the dark night. It’s in crisis that inventiveness is born, as well as discoveries made and big strategies. He who overcomes crisis, overcomes himself, without getting overcome.”

What follows is not theory. I've always liked writing about things I can show I experienced and witnessed in the first person. My training is in experimental physics, and for me a thing is true only if I've had the chance to verify it in that enormous laboratory called life.
So what I'm about to relate is a story of unpredictability I recently experienced very close at hand. It's also and above all a story of the incredible resourcefulness of which human beings - the protagonists of this story - are capable. By the time you've finished reading it you'll be in agreement with me and Albert Einstein: the unpredictable improves humanity.

One day in the early stages of lockdown - the morning of Friday 13 March 2020, to be precise - I was woken early by a phone call from Nunzia Vallini, the editor of the Giornale di Brescia, with whom I've worked for several years on the diffusion of the Industry 4.0 model in the schools of Brescia and the surrounding province. Her voice was different. She seemed agitated. In a hospital in Chiari, Brescia province, they were running out of valves for their assisted respiration apparatus and the supplier would be unable to deliver a new batch any time soon. Nunzia explained to me that if the valves didn't arrive soon a lot of people would lose their lives.

So why was she calling me in particular? Because during our work together on the Industry 4.0 project in schools, she'd heard me say many times that with 3D printers you could make objects of every shape and all kinds of materials, quickly and at a reasonable price. Her call was a final, desperate throw of the dice, perhaps her last hope. The last thing she said before she hung up was: "I'll send you a photo, so you can tell me if it's possible to print this valve. It's really, really urgent." 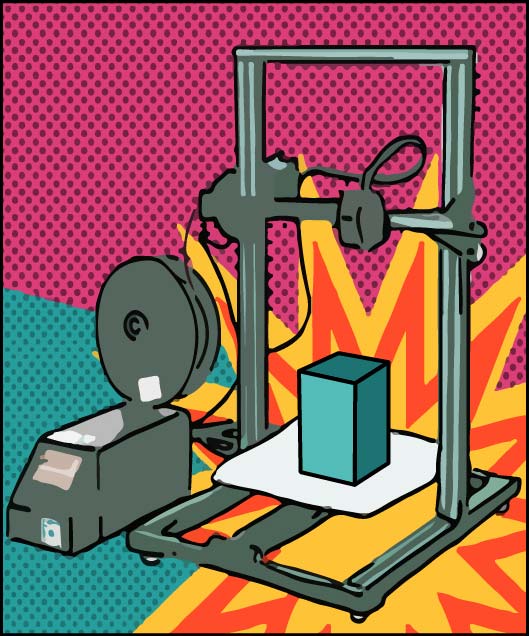 When I saw the valve I hadn't the slightest doubt it could be printed. But to do so, I needed to have the valve in my hand, measure its dimensions and proportions, and then simulate its design on the computer using 3D modelling software. There was no time for all this, and anyway, my laboratory was closed. After who knows how many phone calls to 3D printing shops and technicians in Brescia, we fastened on Cristian Fracassi, an entrepreneur in his thirties and owner of a tech startup, Isinnova. Fracassi offered to go to Chiari and pick up a valve from the hospital and make copies of it on his 3D printers.
In just a few hours, Fracassi managed to digitally model the valve and produce a prototype on a 3D printer. He then submitted the prototype for validation by the doctors at Chiari hospital. Their verdict was positive, and the go-ahead was given for the production of hundreds of valves.
By Saturday afternoon, just 36 hours after the call from Nunzia Vallini at the Giornale di Brescia, the 3D-printed valves were installed and operating in Chiari hospital.

I was delighted to hear the good news from Brescia and wrote this post on my social media pages, where I was keeping a real-time diary of this innovative project:

“Latest update: 19:30. It works! At present 10 patients are receiving assisted respiration from apparatus containing 3D-printed valves. I would like to applaud the efforts of Cristian Fracassi and his team, who designed and 3D-printed the missing valve. All at lightning speed. You guys are heroes! And I'm happy.
But let me get a grievance off my mind here. So many people reacted to my earlier posts with reservations and criticisms of this method of procedure. It's true it's unorthodox, imperfect, irregular, unverifiable and so on... but it's saving people's lives, for God's sake!
So to all the naysayers, I have two words to say: We. Won. Cristian won, Chiari hospital won, everyone who believes they can overcome obstacles, everyone who acts instead of criticizing, who works and hopes for the best, won. It's humans who are making history here... and I'm on their side. And I always will be!”

In the following days, Isinnova e-mailed us the file containing the 3D models of the Venturi valve designed and produced in Brescia, and later in Milan too, using the 3D printers in our lab (TheFabLab) and the labs of some long-standing partners of ours (Ideafactory). We managed to produce hundreds of valves which the civil defence services distributed around the hospitals of northern Italy (Savona, Milan, Cinisello, Settimo Milanese, Cremona, Mantova and elsewhere), saving thousands of lives. 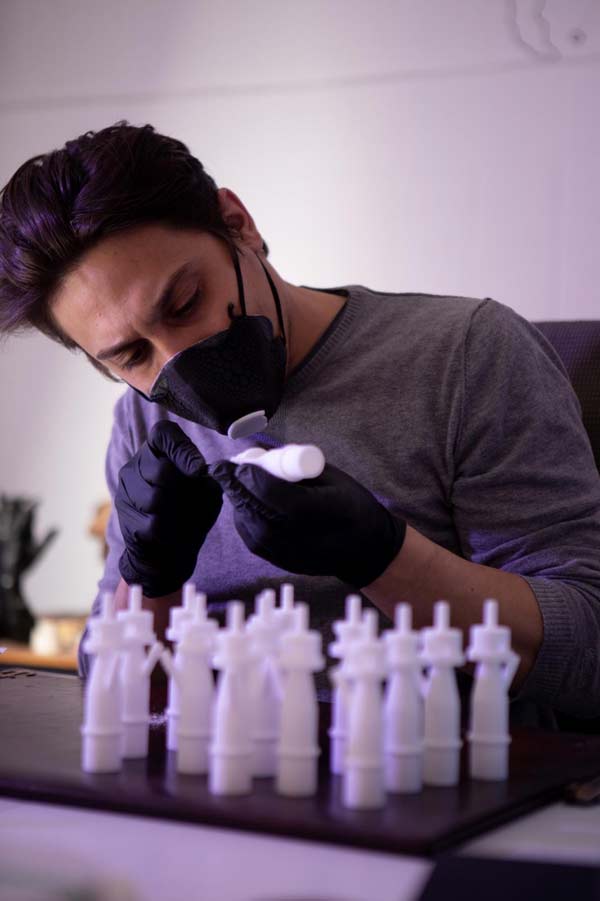 But as we all know, by the middle of March the crisis had intensified in Brescia and across northern Italy. The unpredictability and the intensity of the epidemic brought the healthcare system to its knees, and hospitals were soon desperately short of supplies.
As the crisis deepened, and prompted by an idea by Renato Favero, a retired doctor from the province of Brescia, a few days after his success with the Venturi valves Cristian Fracassi proposed using a 3D printer to modify a snorkeling mask sold by sports retailer Decathlon to convert it into a continuous positive airway pressure (CPAP) ventilator. Here again I had the good fortune to witness this operation at first hand through the design and production phases. I had already approached Decathlon and was in touch with the company's senior management, and Decathlon soon announced it would be donating 10,000 such masks to the civil defence services, who in turn would distribute them all over Italy.

At the same time, the 3D file containing the design of the modified mask was made available for free over the web, allowing 3D print shops all over Italy, from Valle d’Aosta to Sicily, to produce and distribute the valves required for converting the masks into emergency medical apparatus. In this instance too, thousands of lives were saved by an act of courage and innovation.

As I said, this is a story that brought out the best of our species: creativity, imagination, courage, skill, humanity and empathy. It's no coincidence all these qualities emerged in the part of the country worst hit by Covid-19, when the crisis was at its peak and its further development was impossible to predict. It's a story that taught us it's possible to rethink manufacturing processes to make them more sustainable, based on a digital, on-demand distribution model that is waste- and pollution free. We'll be working to spread this idea in the coming years, and in doing so we'll make the world a better place. And that's why the unpredictable can be a blessing. 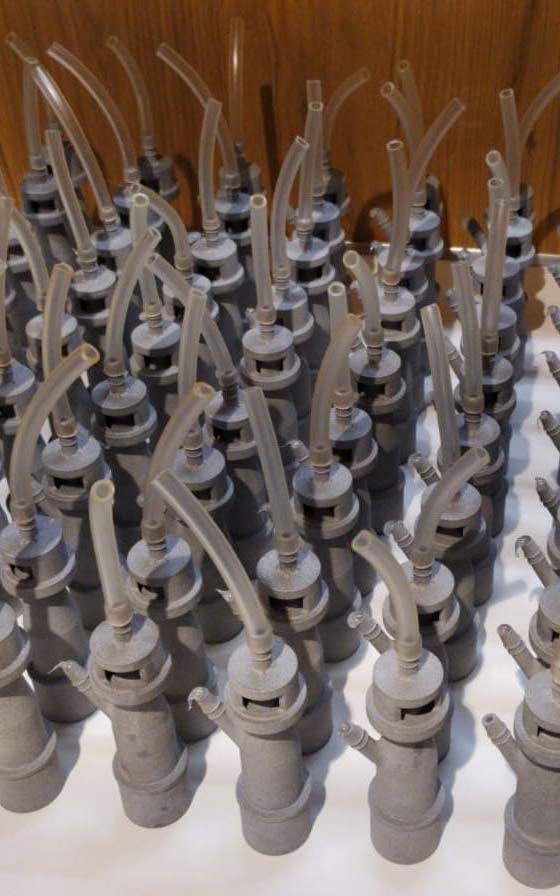 Returning to the earth

Going past the “smart city”, and how many young entrepreneurs are beating the path to a sustainable development that starts from the land.

The city in suspended animation

The pandemic from an architectural point of view.
Giulio Ceppi and “smart citizens”: understanding space and finding a new way to live in the city.