An interview with CIBO 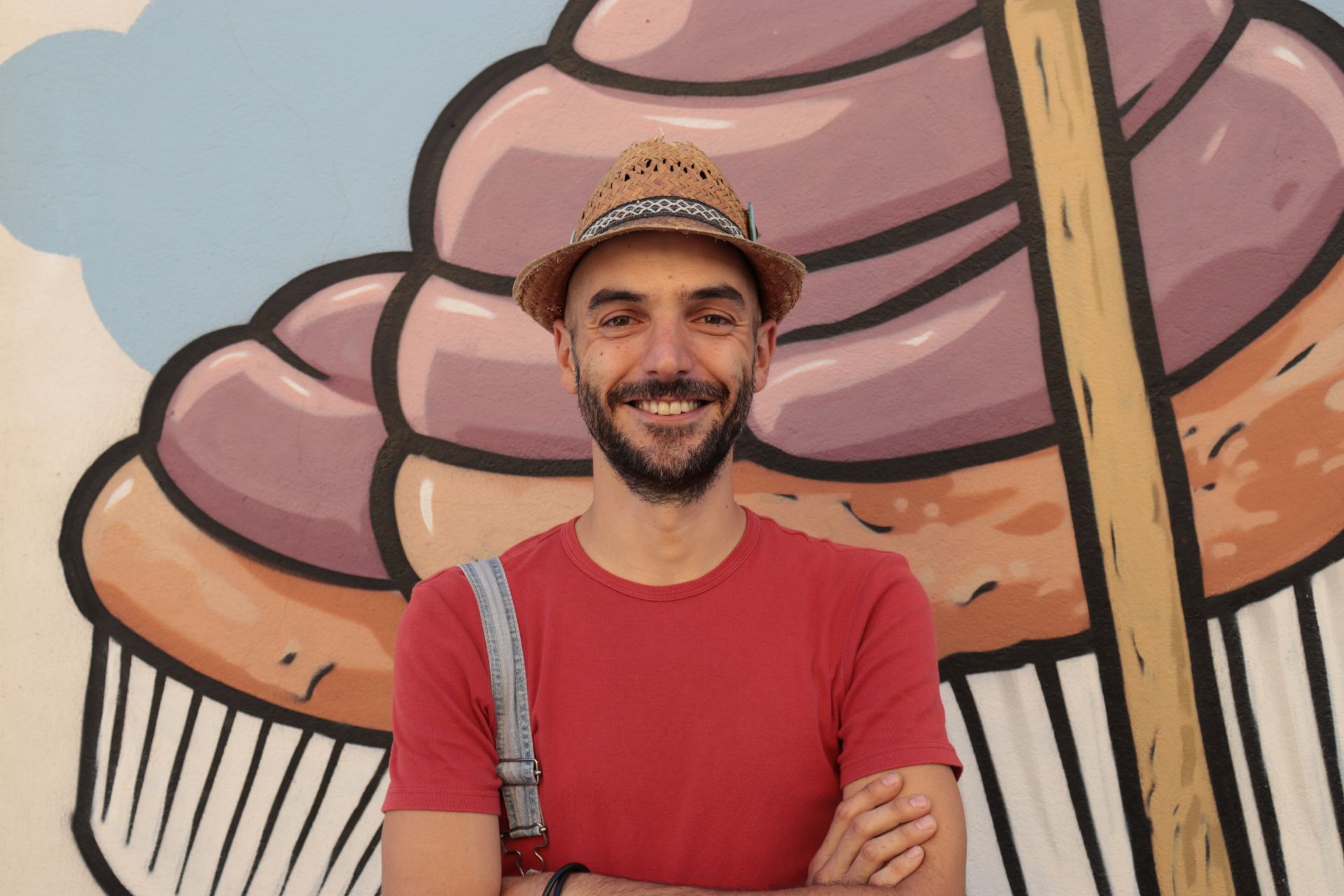 CIBO has made street art a tool for social criticism that can be understood by anyone. 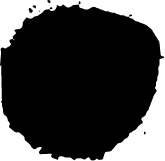 Pieces of cheese in the place of swastikas, cupcakes instead of celtic crosses, and pasta with beans to cancel out messages of hate.
Can food be a weapon for fighting hate and racism? Can a slice of pizza teach ethics and social equality?

Much more than that: "Food transforms into blood, and blood into heart and mind; into thoughts and feelings. Human food is the foundation of culture and feeling", affirmed the German philosopher Ludwig Feuerbach, famous in particular for having coined the expression "Man is what he eats".
To further simplify: food is survival, and that is the case for everyone.
Food is a universal culture that unites people and populations, regardless of age, sex, disabilities, race, ethnicity, origin, religion, economic status, or anything else.
A true form of civic education that Pier Paolo Spinazzè, known as CIBO in the art world, has chosen to spread not in the classroom, but by covering symbols of political extremism with colourful, culinary-themed murals.

From the perspective of social inclusion, sharing and dialogue, CIBO is proof that the artistic side of the agri-foods world can help to encourage cultural and social integration between people within a community, and between that community and the rest of the world. 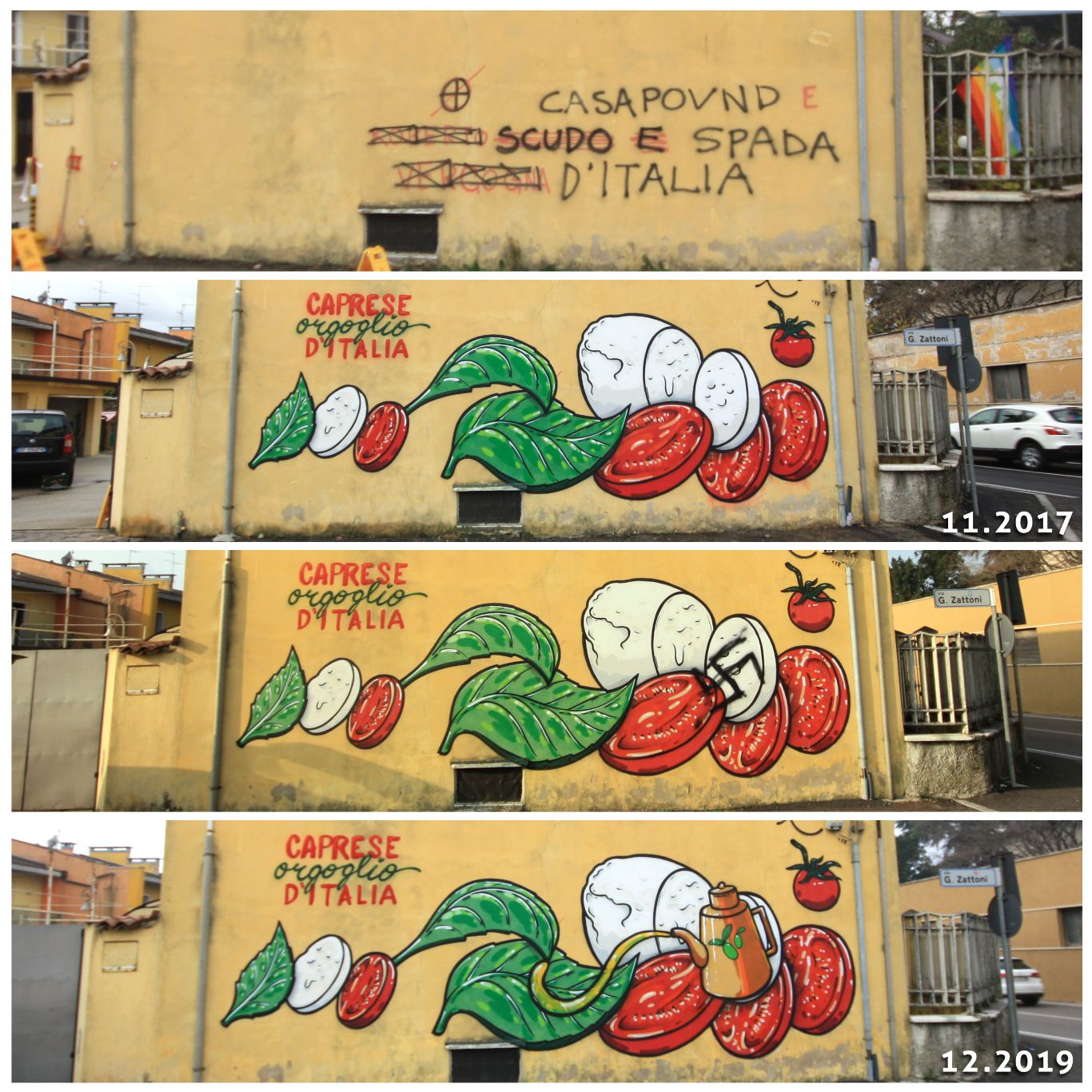 "Like all beautiful things, it started partly as a joke and partly out of necessity. I was tired of seeing fascist symbols, swastikas and hateful messages in my city, so I decided to start covering them with murals. I was looking for symbolism that would allow me to bring awareness to the topic and make a tangible difference in my city. It had to be something local, something pop, something that would reach everyone, that citizens would feel was their own. The topic of food is very important for us Italians; it is a central, pleasurable moment in our day. Our national culinary heritage is a fundamental aspect of our culture. Then I realised that finding a piece of cheese instead of a swastika also confused the neo-fascists, who, understanding only hate and violence, have no idea how to respond when faced with "resistance" created with culture and art.
A lot of people ask me why food, exactly. Why not? Underneath it all, food is us: our tradition and our history. For us Italians, food is something sacred. Moreover, for us Italians food also represents our most important moments of connection and sharing."

A benign magic, which the Venetian street artist creates with passion and skill, starting from his home city, Verona, but happily exporting it "when reported" or on commission, to the rest of Italy and abroad.
Artistic talent at the service of the community, with great originality.

Indeed, every week CIBO receives several reports from ordinary people, who let him know when a hateful or violent message has been added to a wall in the city. 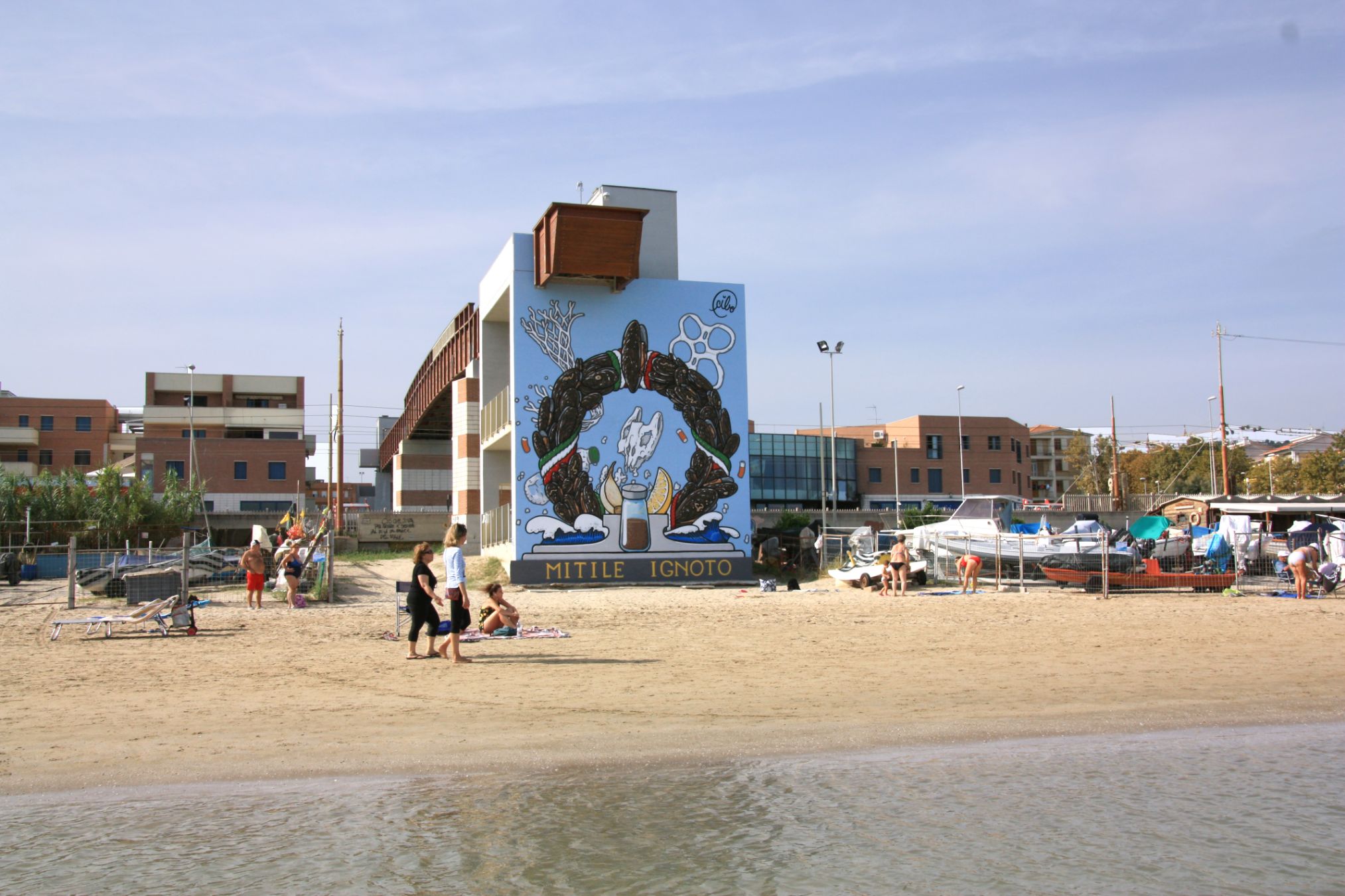 - How do the reports come in?

"They often write to me on social media or via email, attaching photos and the location. Both when new writing appears and when my murals are vandalised. I actually receive reports from all over Italy - of course I can't be present everywhere, but I do my best to intervene at least in my city."

- Does the food you choose simply depend on the shape of the space to cover, or does it also have a connection to the content it is covering?

«It depends. In general, when possible, I always try to create a connection with the local area and follow the seasons: if there are typical products in the area, for example, I try to include them in the work. Then, a lot of murals are designed like a sort of recipe. Or rather, knowing that it is highly likely they will be vandalised, I add a new ingredient each time I intervene, until I have created a complete recipe. Sometimes these performances last for years."

With his colours, CIBO responds to the hate and anger of extremists with hope, giving them the form of tasty delicacies, systematically cancelling out all forms of hate and degradation, violent, racist and divisive messages from the walls.

Using muffins, sausages, complex works and culinary equations, CIBO - with his simple, ironic visual language - brings public art out of the galleries and into people's hearts, making his social message edible and digestible for everyone.

The street artist defines his art as "artistic resistance" and considers it as "a weapon" against those with no culture. 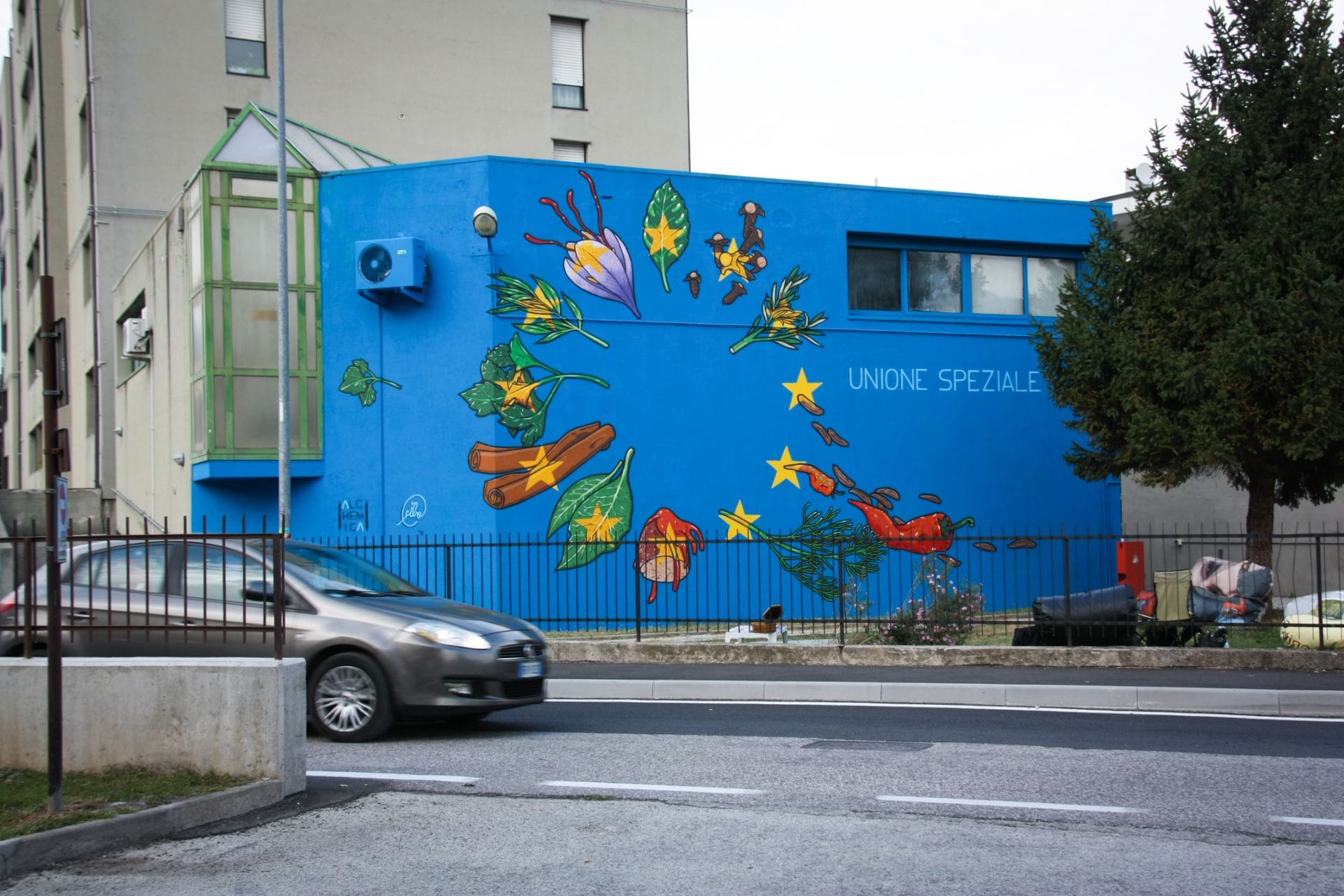 - In your opinion, are hate and racism on the rise, or are they decreasing? Is it possible to educate new generations in the ethics of equality, tolerance and social inclusivity?

"I hope so. Through my works I try to communicate the values of respect and equality; I try to create awareness, but also make a difference, by getting personally involved. My murals are often destroyed, but I return, and always will return, to redo them, because hope, humanity and respect for others must never be lost. The message I want to convey with my art is that everyone can make a difference and give something back to the community, with their own skills and their own creativity."

Today, CIBO can boast important collaborations and the fame of an international artist. From the Italian Embassy in Paris to the Italian Red Cross, via CUAMM Doctors with Africa and the Food Bank, these are only a few of the social and humanitarian organisations that have requested his collaboration as a spokesperson for positive values and messages. 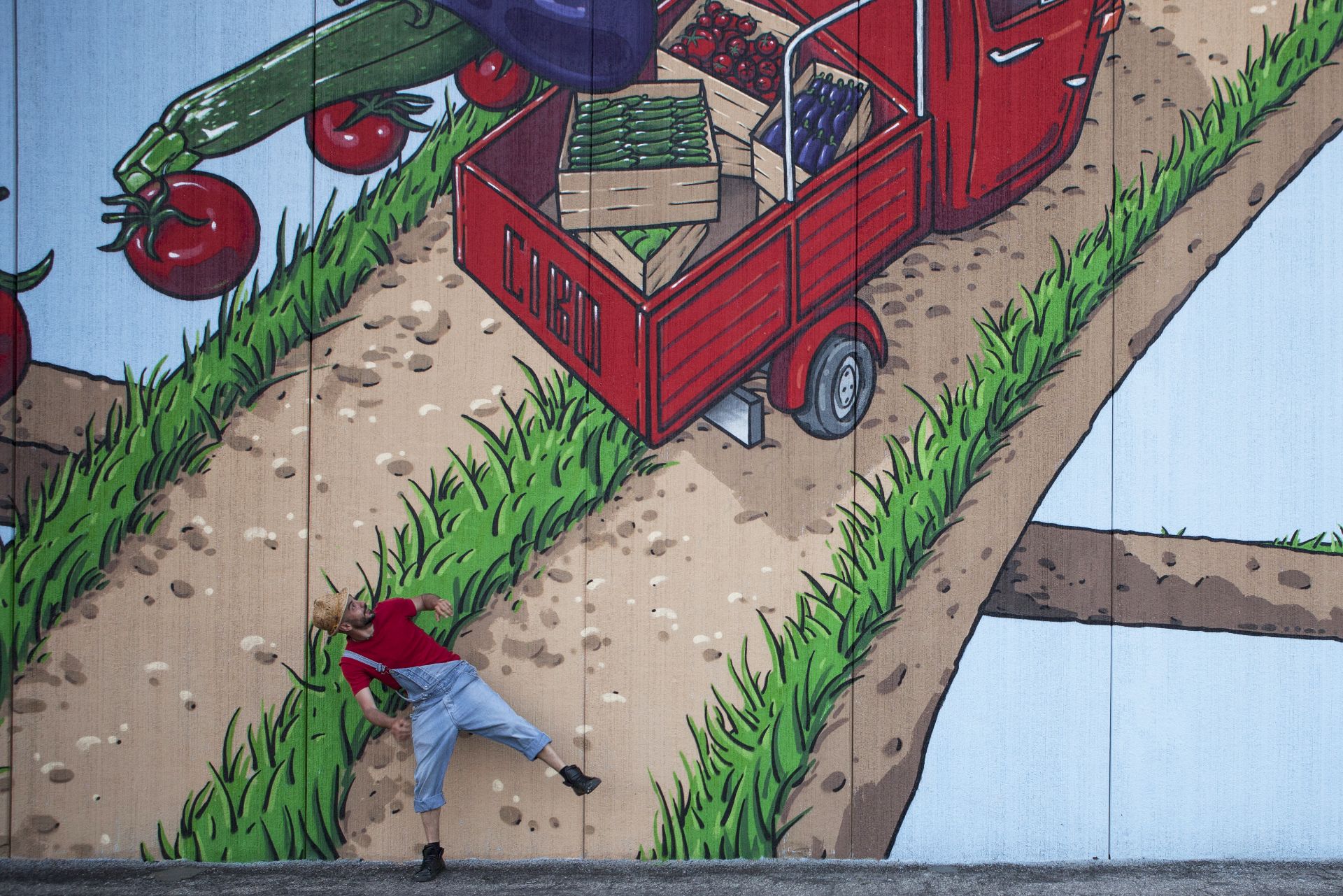 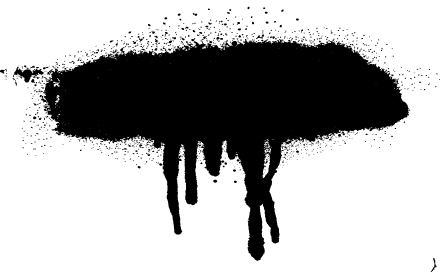 An interview with Niko Romito

From the three-star Reale to a campus for the cooks of the future: the chef and his commitment to education for healthy, sustainable catering that is accessible to everyone.

It improves self-esteem, creativity and wellbeing, and develops awareness: this is why the environment is the best teacher possible for children.