AGRICULTURE 4.0:
THE GARDEN AT THE BOTTOM OF THE SEA

There is an underwater garden in the sea facing Noli, in the province of Savona. In it they grow basil, obviously, because Ligurian pesto is never left out of this region's cuisine; but also beans, peas, strawberries and aromatic herbs such as lemon balm, marjoram, thyme, savory, oregano, sage and passion flower.

Moved by curiosity, and fantasising a little of images from Twenty Thousand Leagues Under the Sea and the legend of Atlantis, I met with Federico Giunto, the head of communication and publicity for this exceptional project, which is totally real. 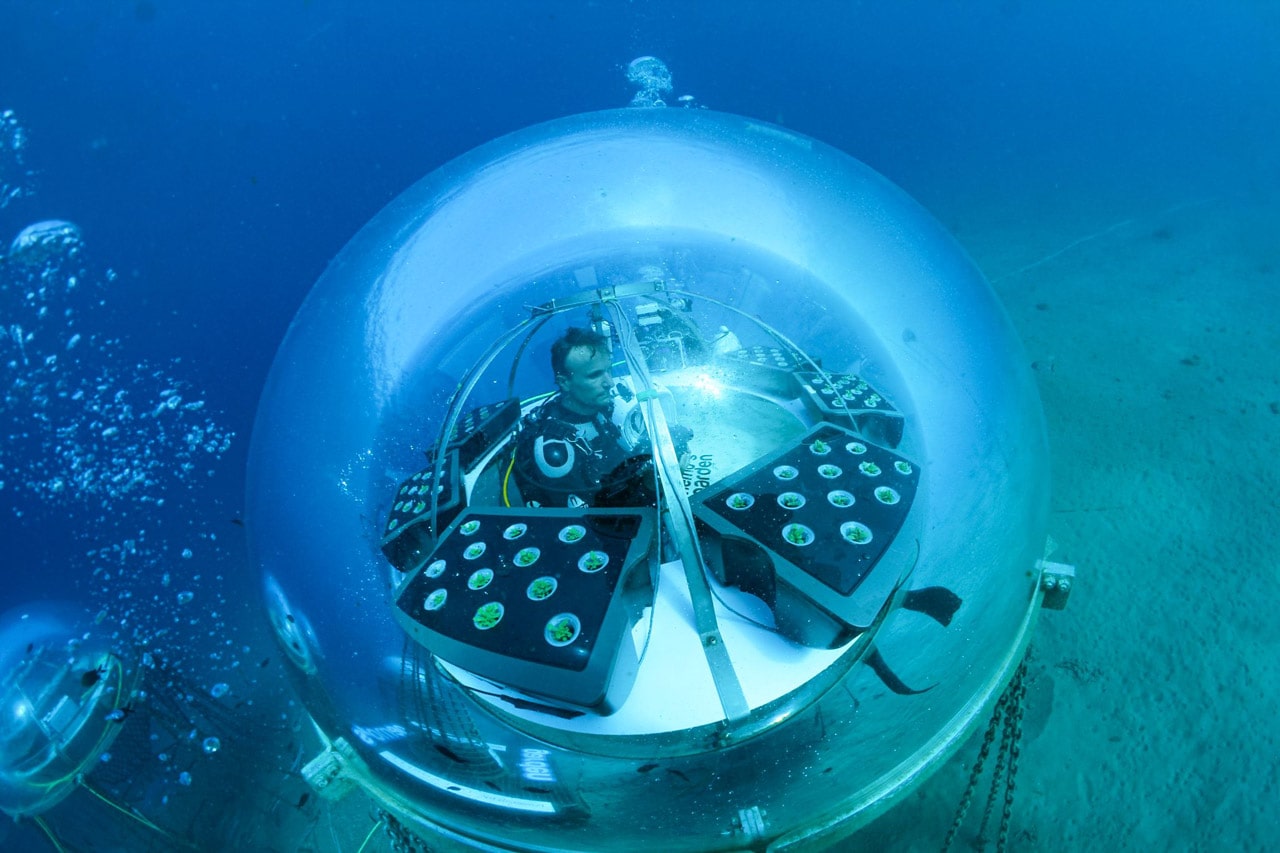 Nemo's Garden (L'Orto di Nemo) is the creative name given to the idea, built in 2012 and invented by engineer Sergio Gamberini, president of the Ocean Reef Group, to create an underwater biosphere, an all-Italian sustainable project.

6 domes, each with a diameter of 2 metres, anchored to the seabed. An underwater garden.
Acrylic structures, resembling great plexiglas balloons, that hold around 2000 litres of air and float at a depth of between 5 and 10 metres, around a hundred metres from the coast.

Real underwater greenhouses equipped with transparent domes to allow the light to pass through, essential for photosynthesis.

Inside these biospheres, the plants grow in an ideal microclimate, at a constant, mild temperature between 24 and 32 ºC. The high level of humidity, between 80 and 90%, and the high concentration of carbon dioxide, are the other indispensable elements for the growth of the plants.
In each biosphere, between 65 and 95 plants grow abundantly.

The Nemo's Garden project is constantly studying and experimenting with how to broaden the variety of plants they can grow. As of today, around 100 different types of plants have been tested; they have started growing other aromatic and edible herbs, such as stevia and salad leaves, plants with pharmaceutical or cosmetic uses, such as aloe vera and goji berries, and certain types of wild tobacco used for the development of the vaccines against COVID-19. They are also testing the possibility of making natural fertiliser from seaweed.
In all these cases, with great astonishment and satisfaction, they saw that germination took place after just 36-48 hours, while the same type of plant in normal conditions takes around 5-7 days. 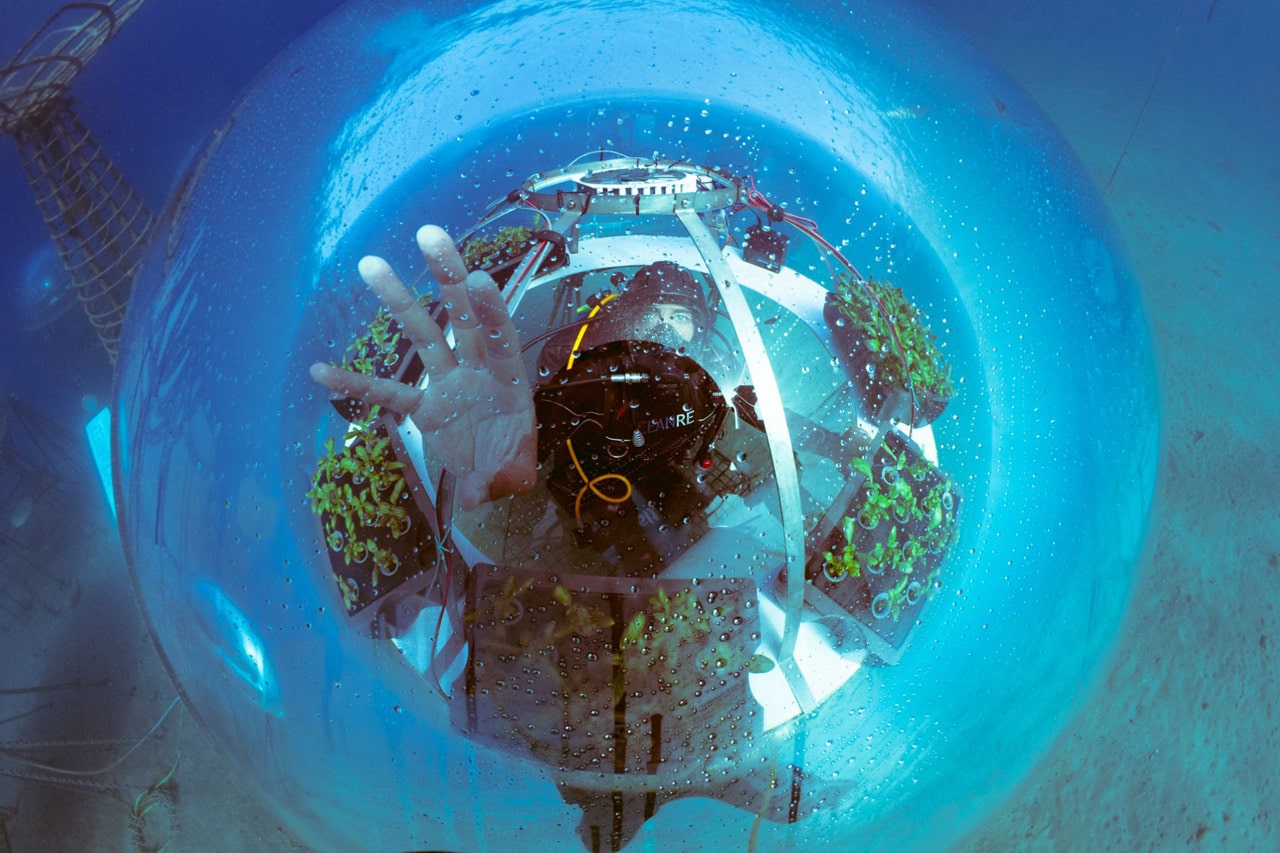 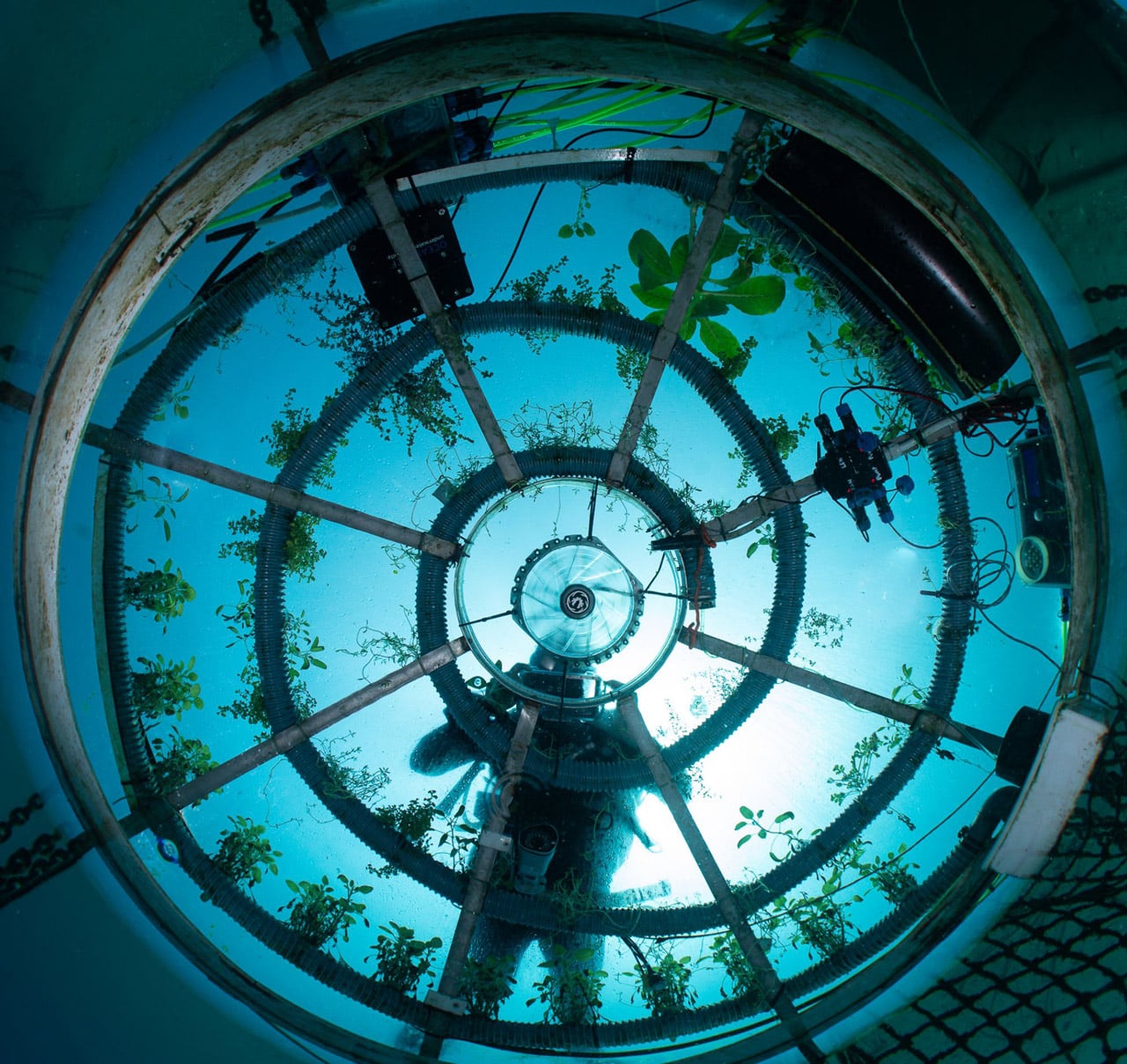 Irrigation? The seawater, evaporating naturally with the sunlight, generates condensation of fresh water on the inside of the greenhouse walls, creating a self-sufficient, natural irrigation system. Obviously the entire system is constantly monitored from the land with an audio/video system.

A project that is entirely ecological, then, and completely self-sufficient, exploiting the renewable energy of the sun and the seawater.

Indeed, this type of garden has no negative impact on the marine ecosystem, and the plants inside the biospheres are certainly safe from insects and parasites: the use of chemical pesticides is completely eliminated, and the cultivation ends up being 100% organic.

Maybe the most delicate phase is the harvest. Saltwater has a devastating effect on plants, so it is essential to avoid any direct contact. The harvesting staff must take the utmost care: they have to rinse themselves with fresh water and use waterproof containers to bring the plants to the surface, and it is also necessary to protect them from direct exposure to sunlight.

So, Nemo's Garden represents an important experiment in hydroponic agriculture, outside the conventional frameworks. A virtuous, sustainable solution to replicate in order to resolve the problems of agriculture, which is more and more compromised by climate change, from the use of pesticides, to soil depletion and excessive exploitation of arable land, to the detriment of forests.

BEYOND THE LIMITS OF CONVENTION

The United Nations Food and Agriculture Organisation (FAO) estimates that in the next 20-30 years the world will need 50% more food, 45% more energy, and 30% more water, in order to sustain a predicted global population of nine billion or more.

According to the FAO, supporting the transition to more sustainable production practices is a prerequisite for sustainable development, in order to help develop agriculture in hostile and inhospitable environments; cultivate crops and plants in protected environments free of parasites; support crops that are delicate, and sensitive to changes in climate; and encourage the cultivation of plants containing active ingredients and/or valuable essences.

In the current scenario of staggering population growth, we could consider underwater agriculture as an alternative, sustainable method, outside the limits of conventionality, to increase harvests and satisfy future food requirements in a cost-efficient way, especially in regions hit by serious drought or scarsity of agricultural land.

The seas are a huge reserve of water and space, and could become a valid alternative to the lack of arable land, particularly in certain areas of the planet.

The climate zone of our country is ideal for the majority of plants. But this system could also be adopted in other regions of the world. For example, it could be used in tropical zones, which have a large temperature difference between day and night. In this case, the thermal stress on the plants would be milder, thanks to the protection of the sea. This initiative could also be an opportunity for all the areas where it is impossible to grow crops due to scarcity of land or water resources.

Being able to make an inhospitable place hospitable for cultivation is a significant prospect, especially for food development.

Indeed, the climate change that Earth is experiencing has negative impacts on many sectors, and the most vulnerable is certainly agriculture.

It is of course not only due to climate change, but also the consequences of intensive, industrial farming: modern agriculture, plant cultivation, pesticides, fertilisers and technological improvements have increased the yield of cultivations, but at the same time caused ecological damage and negative effects on our health.
The most alarming problem caused by crop cultivations is that they use up around 70% of global fresh water resources. Agriculture already draws from groundwater and underground water sources at an unsustainable rate. And it then pours chemical residues and harmful compounds from the abundant use of fertilisers and pesticides back into these sources.

Furthermore, the new cultivation 4.0 has demonstrated sensory qualities equal or even superior to plants from traditional cultivations.
The plants develop more pigment in order to maintain chlorophyll photosynthesis even at low light levels, and the flavour of the food is unchanged! The only thing left is to try it! 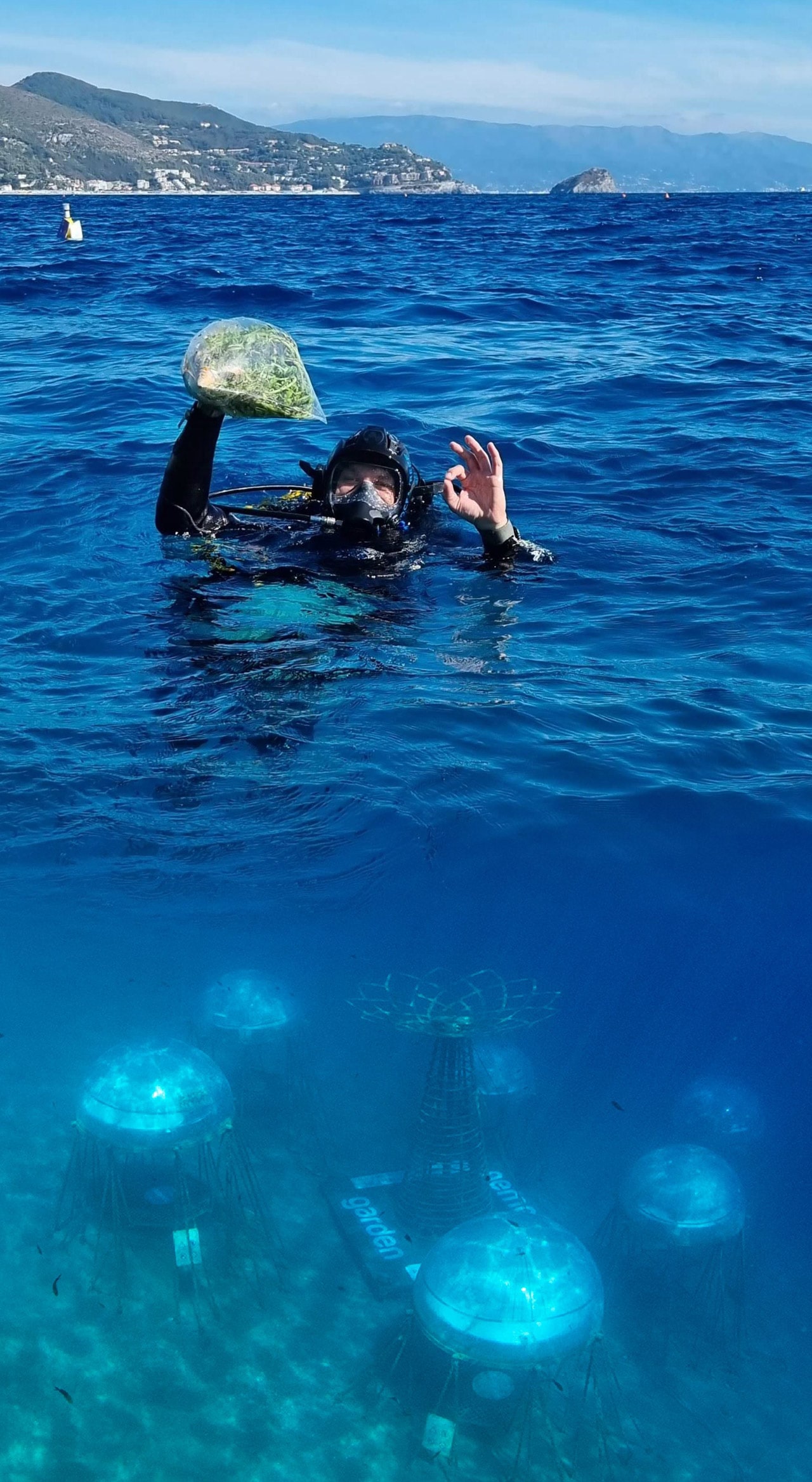 The future of viticulture is in science, and the genetic enhancement of wines. One of the top experts in the world, Professor Attilio Scienza, explains it to us.

A photographer of climate change

Fabiano Ventura and his international project "On the trail of the glaciers", an exceptional tool to create real awareness of the changes taking place.