A conversation with Fabiano Ventura

A PHOTOGRAPHER OF CLIMATE CHANGE 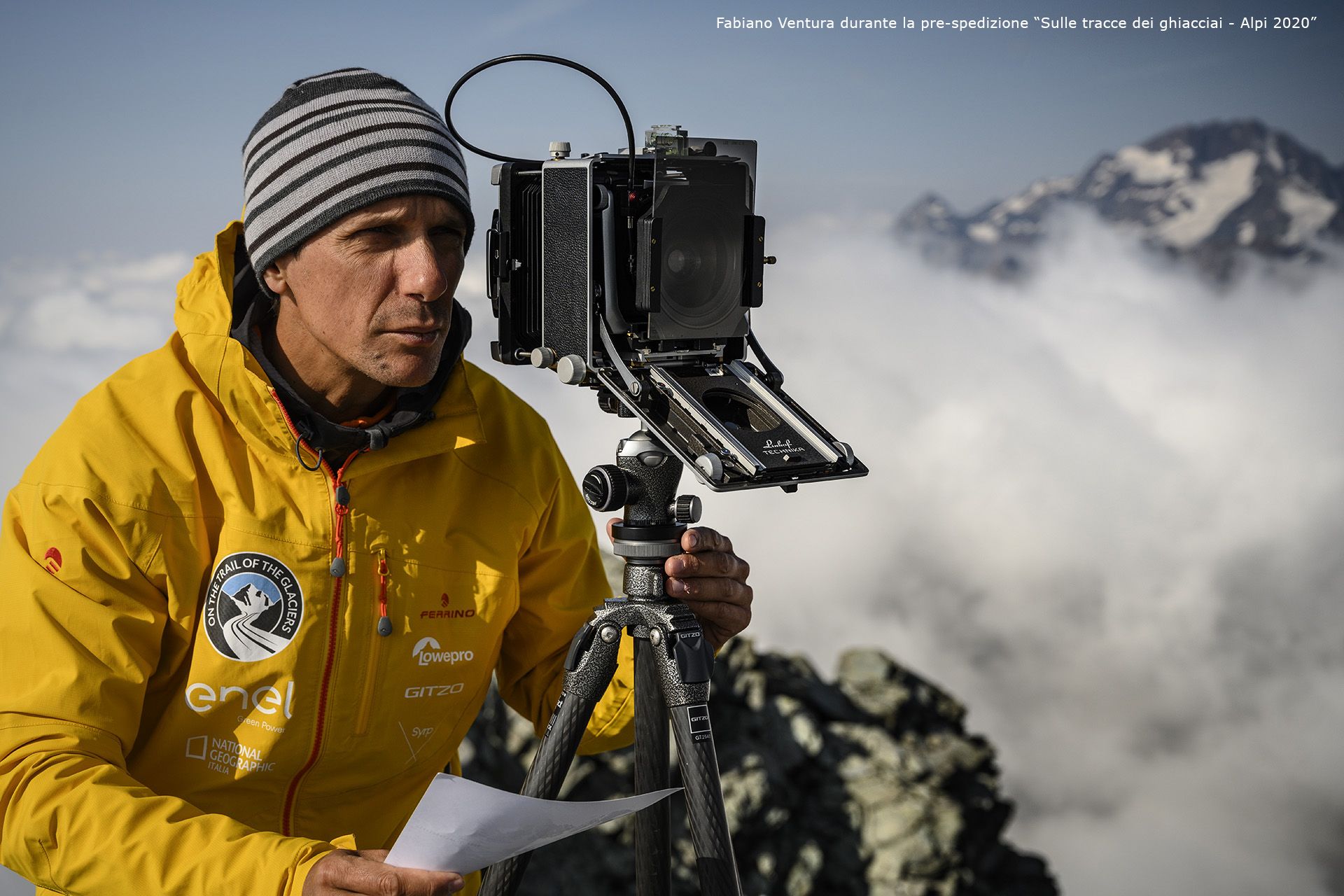 Fabiano grew up in the midst of nature, and learned to respect it from a young age, both loving and fearing the mountains in every respect. Wild landscapes, unspoilt and extraordinary, which offer many different views throughout the changing of the seasons, with the passing years, and with the intervention of mankind.

Fabiano decided to document the history of the interaction between man and mountain, and immortalise the visible consequences of the progressive loss of balance in this interaction.

"Climate change is the primary global problem of our times, but adding to it are many environmental emergencies regarding the climate, the economy, migration, loss of biodiversity, and last but not least, the health-related emergency we are living through at the moment; this is also why I decided to dedicate ten years of my life to the goal of constructing a new way of communicating how the environment around us is changing, and what it is necessary to do to protect it and, therefore, to protect humanity as a species". Fabiano Ventura explains. 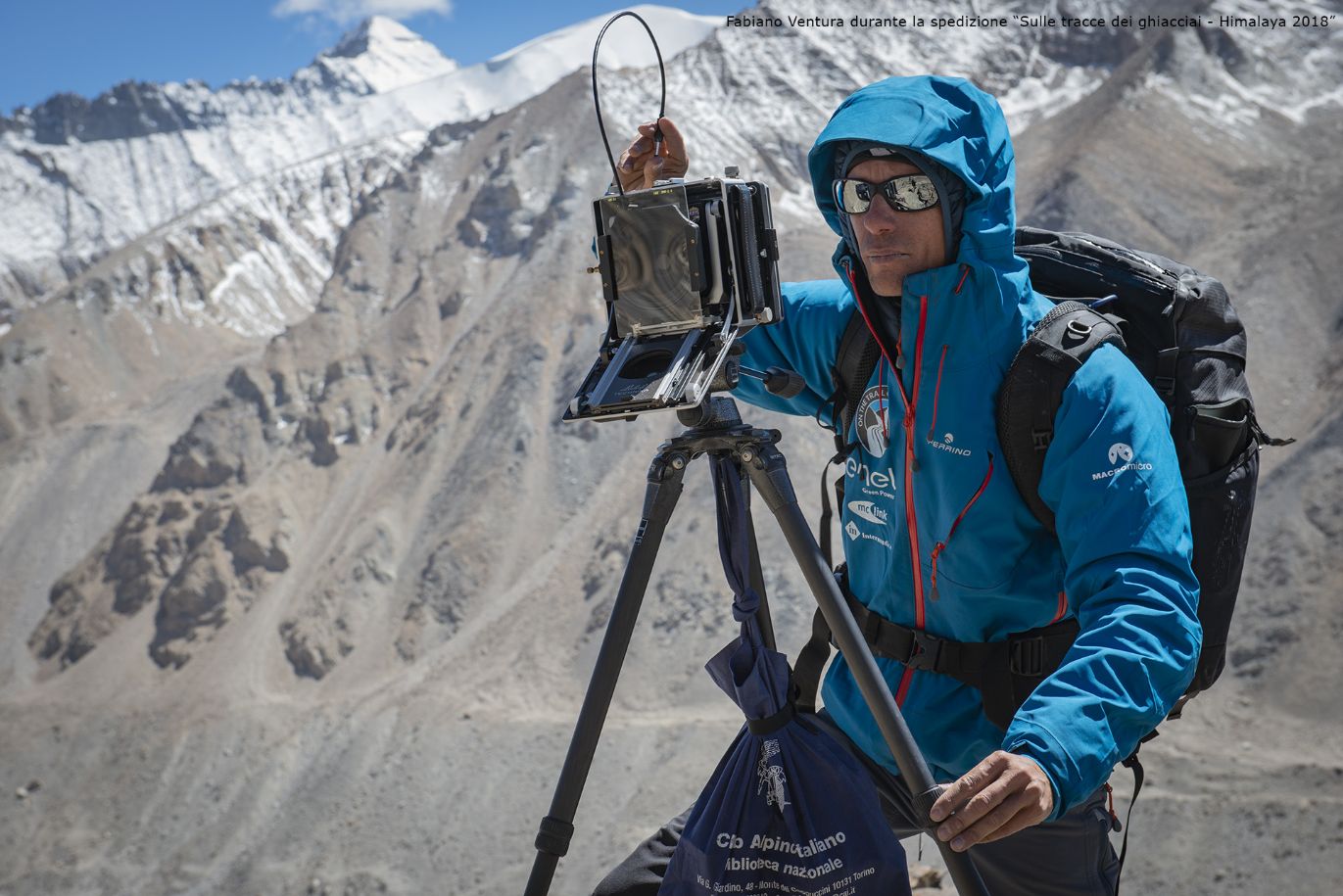 ON THE TRAIL OF THE GLACIERS

This is how the scientific photography project On the trail of the glaciers came about in 2009. It documents and studies the effects of climate change on the most important glaciers on Earth through various expeditions to the most important mountain ranges on the planet. The project, devised and led by Fabiano Ventura, and carried out by the Macromicro Association, in collaboration with a technical-creative staff and supported by an international scientific committee, is now the biggest archive of comparative photographs on the variations in glaciers in existence.

Six expeditions over a period of ten years, to the most important mountain glaciers on Earth: Karakoram 2009, Caucasus 2011, Alaska 2013, the Andes 2016, the Himalayas 2018 and the Alps 2020, with the goal of supporting scientific measurement studies and taking new photos from the same vantage point, and at the same time of year, as those taken by the explorer-photographers of the late 1800s and early 1900s. A crew of over 50 people, including photographers, scientists and researchers, 62 glaciers analysed for 164 photographic comparisons, 15 research programmes, 16 universities and research institutes, and 110 companies and institutions involved. Much more than a project; an odyssey.

The repeat photography proved to be an exceptional tool to clearly show the alarming process of retreating glaciers all over the planet, and the changes in landscapes that had remained unaltered for centuries. The walls of ice, sometimes even hundreds of metres high, have now given way to proglacial lakes, and entire valleys, once covered in ice, are now immense forests or lush meadows.

"We never recognise the value of water until the well dries up", says Thomas Fuller. We always realise the importance of things too late, we understand only when those things are gone.

In this sense, the retreat of the glaciers shown by the photographic comparisons becomes a case study, tells a story drawn out over the years, to make us aware of the consequences of climate change. The strong communicative power of the photographic comparisons, combined with the results of the scientific research, is a contribution to the development of more awareness of the impact of mankind's activities on the climate. Publicising the content of the project has the goal of sensitising public opinion to the fact that we need to safeguard natural resources for the protection of future generations.

The 2020 Alps mission took Ventura's team to the Gran Sasso massif, in the Apennines of Abruzzo. After crossing the entire Alpine region, from Val d'Aosta to Friuli Venezia Giulia, the team moved south, visiting the most important glaciers, and documenting the death throes of the Calderone Glacier for three days - the southernmost glacier in Europe - replicating the photos taken between the end of the 1800s and the early 1900s by photographers Dino Toninelli, Enrico Abbate and Pietro Angeletti.

The glacier, which is located at an altitude of between 2,650 and 2,850 metres, started to retreat in the middle of the 1800s, and went from an area of 7.5 hectares in around 1916, to 4.5 hectares at the end of the last century. The Calderone Glacier is an extraordinary place to observe the effects of climate change, due to its low latitude, and it continues to receive interest from the scientific community for its distinctive features: indeed, on this small Apennine structure, it is possible to study what happens to glaciers at the moment of their extinction, and therefore be able to make more accurate predictions about the future and evolution of Alpine glaciers.

"Coming over the pre-summit of Corno Grande, we quickly reach the point from which Enrico Abbate took one of the first photos of the glacier, on the 19th September 1886. I have the image in my hand, and I find where I am certain the historical photo was taken from, but the morphology of the mountain has completely changed: 134 years ago, the glacier started only a few dozen metres below the Western Peak, running down through the entire valley below, wide and constant; today, instead, the ice wall plummets vertically around 100 metres to reach a steep slope made up of only unstable scree that slides towards the bottom of the basin. As always, the comparison is disturbing, thinking about how much the morphology of the mountain has changed, not only from the perspective of the landscape, but also in terms of its use: only 20 or 30 years ago it was possible to ski down the valley even in the summer months, while now what used to be the basin of a small but thriving glacier is only a scree, inaccessible due to the risk of falling rocks".

In the last twenty years it has continued to reduce, although in different ways depending on the year, until today when it has reached what is most likely its record low.
Indeed, since 2007, when it comes to the Calderone, we have no longer been able to call it a glacier, but rather a snowfield: an accumulation of ice with a smaller surface area and limited thickness, where summer melting is so fast that the mass of ice accumulated during the winter reduces overall.

The edges of the glaciers are redefined, retreat, and make way for snowfields, moraines, vegetation.

The 2020 Alps expedition was divided into two sections, dedicated respectively to the Italian side (2019-2020) and the French, Swiss, Austrian and Slovenian side (2021). With the international expedition in the months of August and September 2021, the fieldwork part of On the trail of the glaciers was finally concluded.

And the second phase started, spreading the word of the results in schools, museums and in the scientific community. With one goal: spread awareness as much as possible of the changes taking place, and the need to take responsibility, individually and collectively, for the future of our planet.

"In these times, when there is much talk about the environment and the climate, words, unfortunately, do not always reach the conscience. Instead, photographs, and particularly photographic comparisons, can open up a path to awareness. A glance at the state of health of the planet, which leaves no space for rhetoric or manipulation, because it is simply reality that speaks. Only by changing consciousness can we change a course that would otherwise be disastrous".

What is the next adventure?

"The international scientific community is now in agreement when we say that glaciers are the sentinels of the climate, and we have been able to test in real life how strong the communicative power of these images is.
In 2013 we were in Alaska. Between the end of the Little Ice Age (1850) and today, Glacier Bay National Park has lost 2,752 cubic km of ice; cubic km of ice that have poured into the oceans, whose levels continue to rise, with disastrous consequences not only from an environmental point of view, but also socially.
This is why we are evaluating a project that monitors coastal erosion and rising oceans; to create a photographic archive for all those areas that in the future will probably be under the sea. Experiencing and testing the importance and value of photographic archives has also pushed us to precisely georeference all the points from which we took the photos for the project On the trail of the glaciers, to help future photographers to very easily repeat the photos we have taken over these ten years".

The future of viticulture is in science, and the genetic enhancement of wines. One of the top experts in the world, Professor Attilio Scienza, explains it to us.

Agriculture 4.0: the garden at the bottom of the sea