CHANGING PERSPECTIVE IN ORDER TO SAVE THE PLANET AND HUMANKIND

An interview with Tomás Saraceno 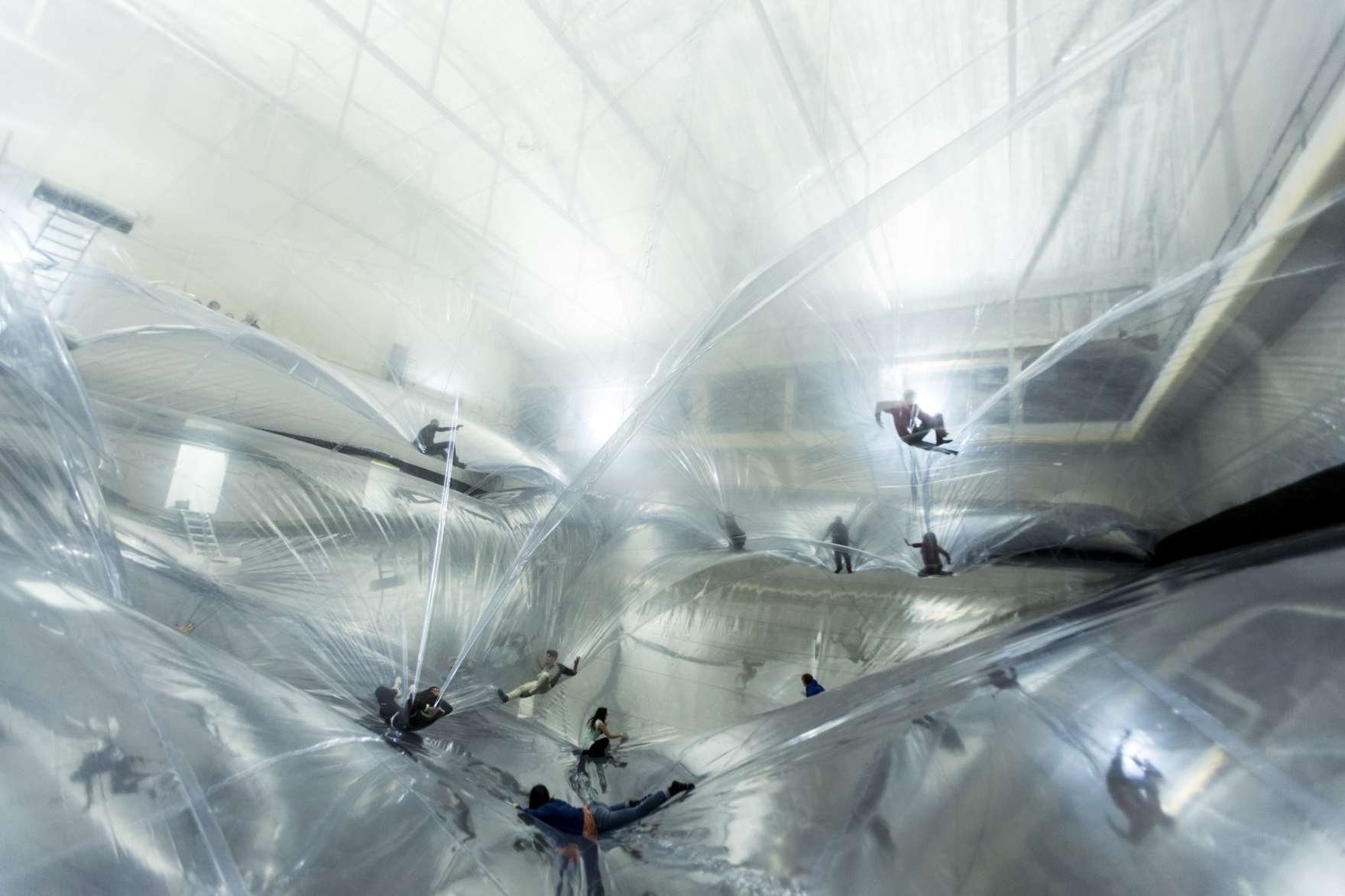 A scientific mind or a creative soul? Scientist or artist?

TS: "Both, because science and art can interact in many ways, and collaborate to improve mankind and our behaviours."

Tomás Saraceno, an architect and performer considered to be one of the most important contemporary artists, uses science as a subject of his work.

TS: "Art is not the end, but the tool chosen to communicate my vision of the universe."

A universe governed by a design that the human brain cannot grasp, only glimpse. What stays with us as humans is amazement and gratitude for having experienced a vision and participated in an intuition. Saraceno depicts and gives a shape to this intuition, with the goal of re-educating mankind to recognise our own limits and respect what we cannot fully grasp or claim to be absolute masters of.

TS: "We have to learn to focus less on individuality and more on reciprocity. This is the only way it will be possible to share the development of our everyday lives." 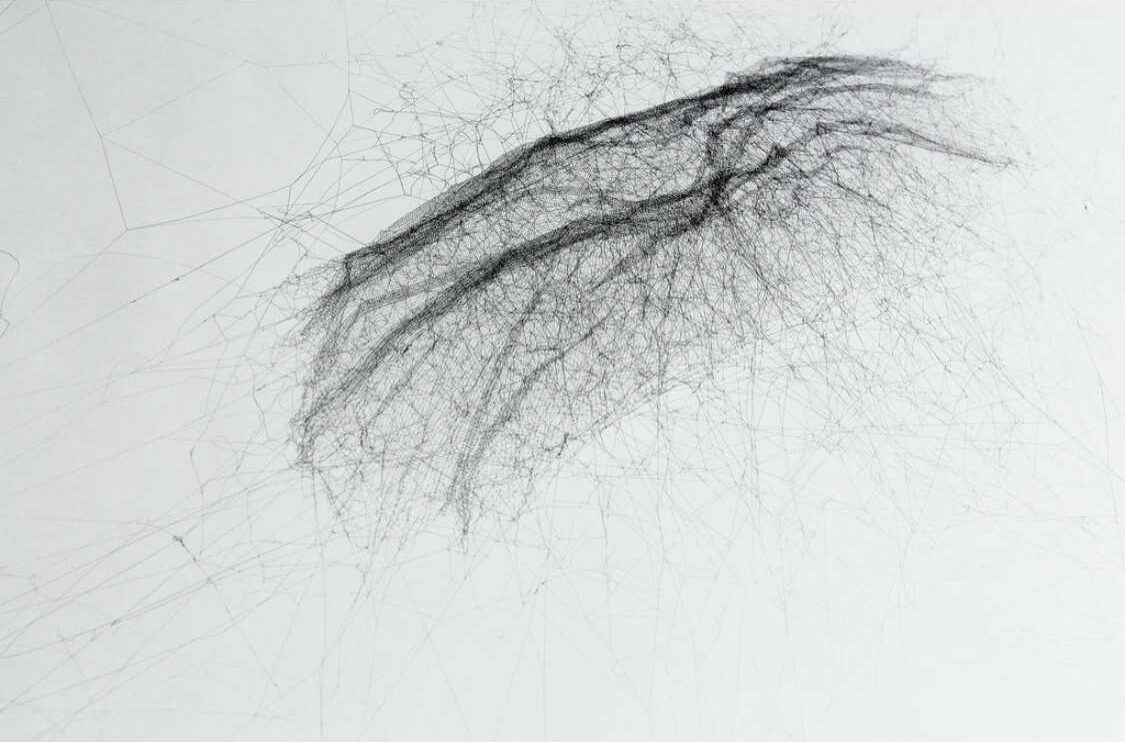 What does the spider feel when it moves on its web? Is it possible to climb a cloud? Is there a way to fly using only the sun and the air?
The visionary, mysterious artist tries to answer these questions, offering large installations that push the visitor to interact and become part of them. His work, articulated in series that repeat over the years, is made up of large, immersive structures with a playful, spectacular appearance, in the form of flying cities or spiderwebs, which the audience can walk on and modify with their movements and the weight of their bodies.

His approach is interdisciplinary and combines science, art, engineering, arachnology, music, sociology, technology and urban planning, trying to push the viewer to take a new perspective, for a more inclusive and ethical understanding of the world around them.

TS: "Inserted into a symbolic context, we become connected to non-human elements, such as dust, spiders or plants, protagonists of the installations and metaphors of the cosmos. The ordinary, reassuring perspective of the world we know is upended, or distorted, lacking the familiar references of known experience, and the opportunity of a new reality is offered on the horizon."

This way, by shaking people up and triggering discomfort, Saraceno's work invites people to critically reflect on the relationship between mankind and the universe.
Tomás's visionary, participatory art aims to strike and shatter the arrogant culture of the Anthropocene, where mankind irreversibly damages the ecosystem we live in, and teach us how to lay the foundations of the Aerocene, where mankind searches for a new balance, shared with the universe we are simply one part of.

TS: "It is possible to imagine a different era, the Aerocene, characterised by sensitivity projected onto a new ecology of behaviour. Ecosystems need to be thought of as networks of interaction in which every living being evolves along with all the others. Focusing less on individuality and more on reciprocity, we can go beyond simply considering the means necessary to control the environment, and hypothesise a shared development of our everyday lives." 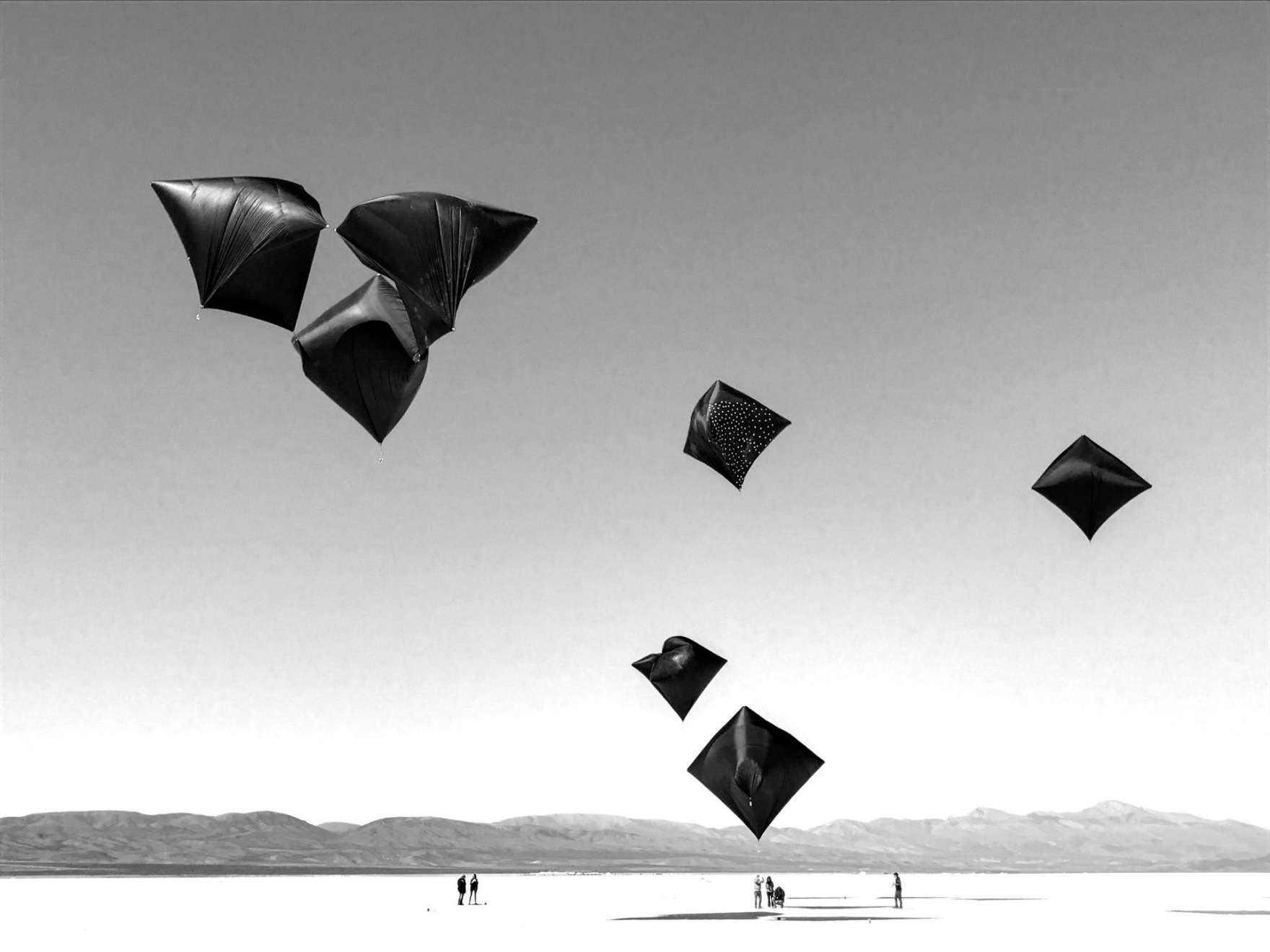 And this is precisely the spirit with which, during the 2015 Climate Change Conference at the Grand Palais in Paris, Tomás Saraceno presented Aerocene, a project that sees zero-emissions flying sculptures take off and float in the sky, thanks to the heat of the sun and the infrared radiation emanating from the earth. The project is still active, and continuously evolving.

Aerocene has also become an interdisciplinary artistic community that develops projects with an ecological sensibility, for a new ethical collaboration with the atmosphere and the environment, in an era free of fossil fuels.

Representing and prefiguring the transition into the new geological era of the Aerocene, and focusing on this highly valuable element, is the complex installation Aria (Palazzo Strozzi, 2020), which, as well as referring to themes and elements characteristic of the artist's work, also aims to be a call to respect the planet and its atmosphere.
Aria is built around 33 special tarot cards reinvented by the artist, and develops through 9 spaces. At the centre of everything is the figure of a spider and its web, symbolising the metaphor for the connections between everything that exists in nature, to indicate that we are all bound together, and that - tangled in one enormous spiderweb - we are all part of one whole.
An immersive experience for a holistic approach that exemplifies the complex network linking mankind to both the microcosm of particles and the macrocosm of the universe.

One of Tomás Saraceno's biggest sources of inspiration is spiders and spiderwebs, and he was the first artist to use a tool that can measure, scan and digitalise a spiderweb in 3D. 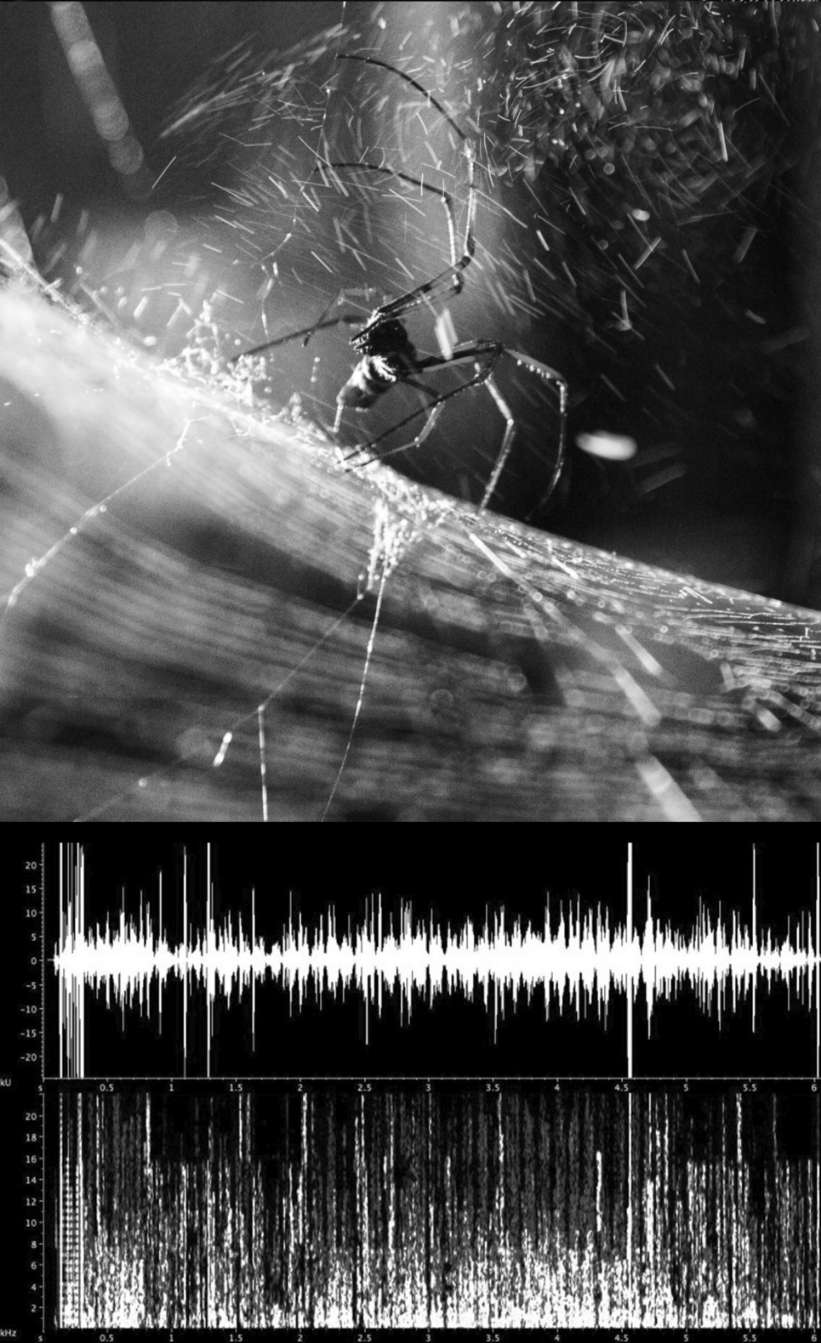 TS: "For us humans, who destroy our environment, the spider is an example of the alternative: the threads of a spiderweb are both produced by the spider's body and the tool it eats with. It is a different narrative of a relationship with nature and how to live in it: decentralised."

14 Billions is an installation exhibited in 2010 in Stockholm, in which a 3D scan of the web of a black widow spider was presented for the first time in history. In Orbit, exhibited in 2013 in Düsseldorf, is an enormous 2500m2 spiderweb suspended over 25 metres from the ground, containing spheres on three levels, fully habitable. Visitors could climb up and see the square from above, as if they were flying. Just like with a spiderweb, each visitor, altering the tension of the threads, generated a vibration that could be felt by everyone present, just as it happens for spiders. A similar artistic experience is offered by On Space Time Foam: an accessible installation made from membranes positioned 20 metres above the ground. Visitors could dive into and move around in it, as if they were in an enormous dirigible/cloud; the overall effect of the movement brought the structure to life for those watching from below.

TS: "In everything, it is the enormity of space that hosts matter, the cosmic network."

These artistic experiences are a few of the routes the artist uses to encourage us to reflect on the defining challenges of our era, which have become more and more urgent, such as pollution, climate change, the consumer economy, and crossing natural geographical and social barriers. Science and art work together in the name of a common interest: encouraging and creating new perspectives that overturn the dominant model and lead to a new ethics of behaviour, through a cultural revolution. 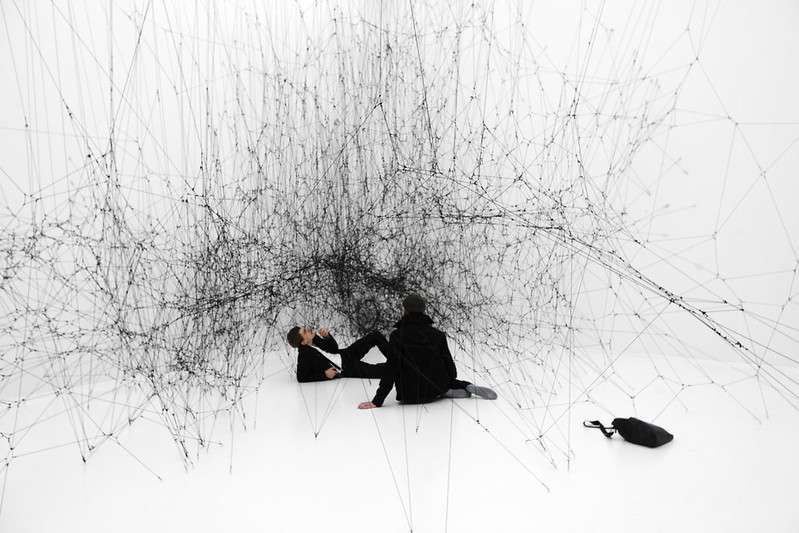 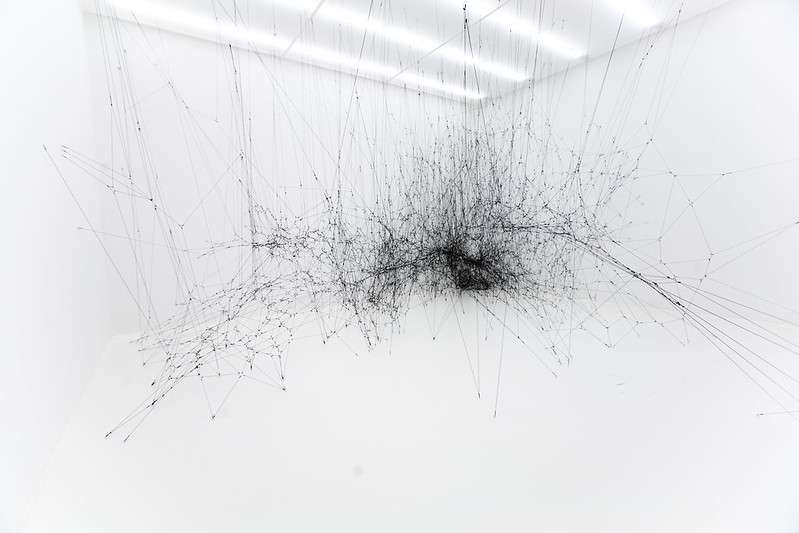 Sport and the environment: a sustainable bond

From the UN 2030 Agenda to sports federations, via innovation: sport is an ideal channel for spreading eco-friendly culture.

The conscious citizens of tomorrow are the children of today

Educating the very youngest in sustainability, and cultivating their enormous potential.
This is how teachers can contribute to change.